When it’s cruise night on Whittier Blvd. in East LA, all kinds of cars come out: Lowriders, Bombs and mostly police cars. Want to know who are the real traffic violators? Read further and find out.

One day we were shopping at Greenspan’s, the last original clothing store in Los Angeles, when we got into a conversation with a married couple who told us that “they would cruise on Whittier Blvd. Saturday night”. I was super stoked to hear this since I had heard rumors about those nights and had seen some videos on photos on the almighty internet.

We found out that it was bound to happen on the same day that Born Free and some other stuff was so we prepared for a mighty long day… We got up super early to head to Huntington Beach for Donut Derelicts, went for coffee and pancakes and later on made our way to Silverado for the Born Free Motorcycle Show. This would have been a super exhausting and amazing day on its own but we weren’t done yet: As soon as Born Free ended, we hopped back into the car and made our way north to East LA to go look for the cruisers on Whittier Blvd.

We knew the cruise night was happening somewhere between Atlantic and Garfield on Whittier so we went to the area and found a shopping mall right in the middle where we parked our car. Already rolling into the area we could tell that there would be police all around. The parking lot of the shopping mall clearly said “no loitering, no cruising”. There were one or two lowriders head and there hiding in the shadows waiting, but there wasn’t no real cruising going on. 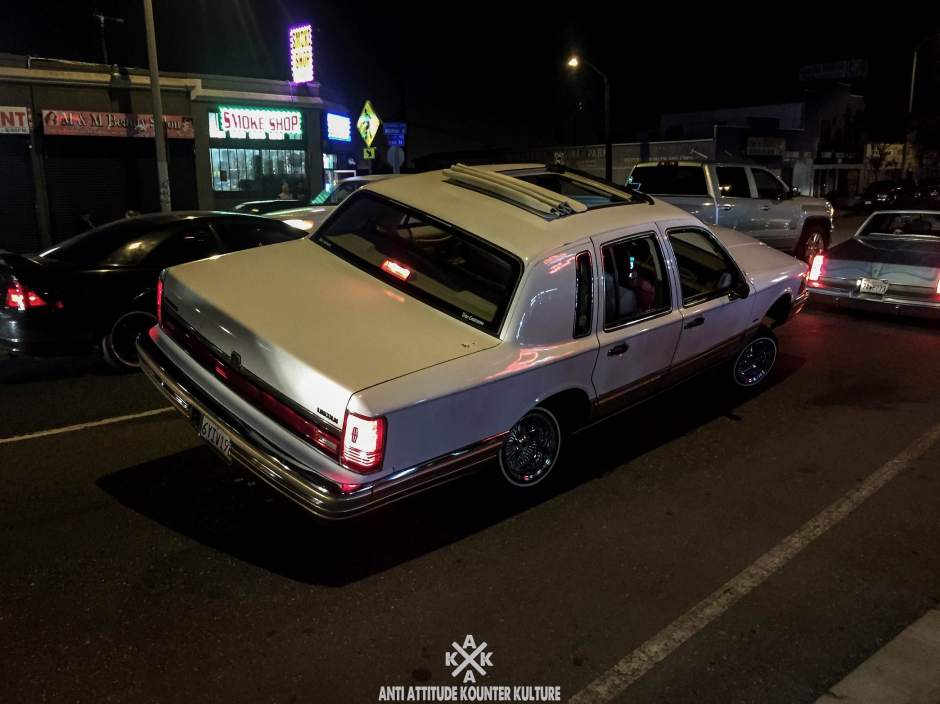 Sometimes you could see a lowrider passing but it wasn’t anything like we had expected it. Kind of disappointed we already thought about calling it a night and head to bed. If there wasn’t no cruise going on, we just had to do our own to we started cruising up and down Whittier Blvd. for a while. And you could clearly see that there were cars all around the area roaming the back streets. Police were present on every intersection with multiple cars and signs all around telling that cruising was not allowed this night. Bear in mind that the area were the cruise was bound to happen was about two miles long, just try to imagine how many police cars there were actually.

After talking to some of the locals we found out that the cruise would start a bit more on the western side of Whittier so we quickly u-turned and headed there. Already when we got there we could clearly see that there was a lot going on so we parked our car and went to see if there was something going on. For some innocent fifteen to twenty minutes an actual cruise happened and we were right in the middle of it. Cars bouncing up and down, taildraggin’, hoppin’ and whatnot could be seen on the street. Boom, our minds were blown and we were hooked.

It didn’t take long for the police to arrive again though and tell everybody that if they would keep their cars parked on the side of the street they would get tossed. Shutting down the whole block and causing a huge traffic jam the cruise night was over before it had really started. Speaking of blocking the traffic and causing a mess the police sure did a good job. Just saying, who’s the traffic violator here?

We didn’t see much of the cruise night but we’ve seen enough to take a glimpse into the atmosphere surrounding those magical cars and their owners. Totally amazed by what we had seen we headed back south to get some sleep already looking forward for the BBQ at Elysian Park and the Bomb Show in Long Beach that we would go to the next day. We’ll be telling you this story shortly.

I have to apologize for those shitty photos since they were only taken with an iPhone. After hearing that the police sometimes used to take away cameras from people who took photos because they were “evidence” I didn’t really want to donate my DSLR to the LAPD.