When Cadillac and Oldsmobile introduced overhead valve V8 engines in 1949, the interest in flathead V8s quickly started to decrease. In 1951 Chrysler introduced the HEMI and the interest in flathead engines decreased even more. In this day and age, flathead engines are kind of making a comeback, not only because of purity but sometimes also because of the legal requirements some countries have for modifying cars.

By 1952 things had definitely started to change: At Bonneville there were five Chrysler V8s, four Cadillacs and two Olds Rocket V8s. When the 1953 Bonneville program was printed, the future of hot rod engine competition was set to become an OHV thing: The listed entries included 17 Chryslers, 7 each Cadillac and Olds, one Lincoln, five DeSotos, one Dodge, and four Studebakers – all OHV V8s.

There were still some overhead valve conversions available for flathead engines: Adams-Moller C-T, Ardun, and the Lee Chapel Tornado-equipped flathead, but as good as these were, they were still stopgaps before the factory overheads took over. It probably isn’t a fair comparison to call these conversions „flatheads“ anyway, even though they were adapted to a flathead block.

Most of the dry lakes and Bonneville competitors were capable of making their own intake manifolds, or any other pieces they needed to extract power from these new engines, and they started realizing extra performance almost from the start. Those who had to depend on buying ready-made speed equipment for a given engine simply had to wait until the manufacturers started building equipment for the OHV engines.

After the Mopar Hemis the next onlaught to the flathead was the small block Chevy V8 which came out in 1955. Due to its light weight, compact dimensions, and performance potential, it was the next „Great American racing engine“ after the flathead Ford. Because of the exterior dimensions the Chevy V8 became the engine of choice not only for racers, but as replacements for Ford engines in street rods and customs.

Unfortunately, the era that ushered in the OHV engines from Detroit also brought in strong financial involvement from the same manufacturers and from other related industries, a situation that made racing easier for a select few, and much harder for those not chosen to be part of the act. Racing wasn’t as much fun as it had been. 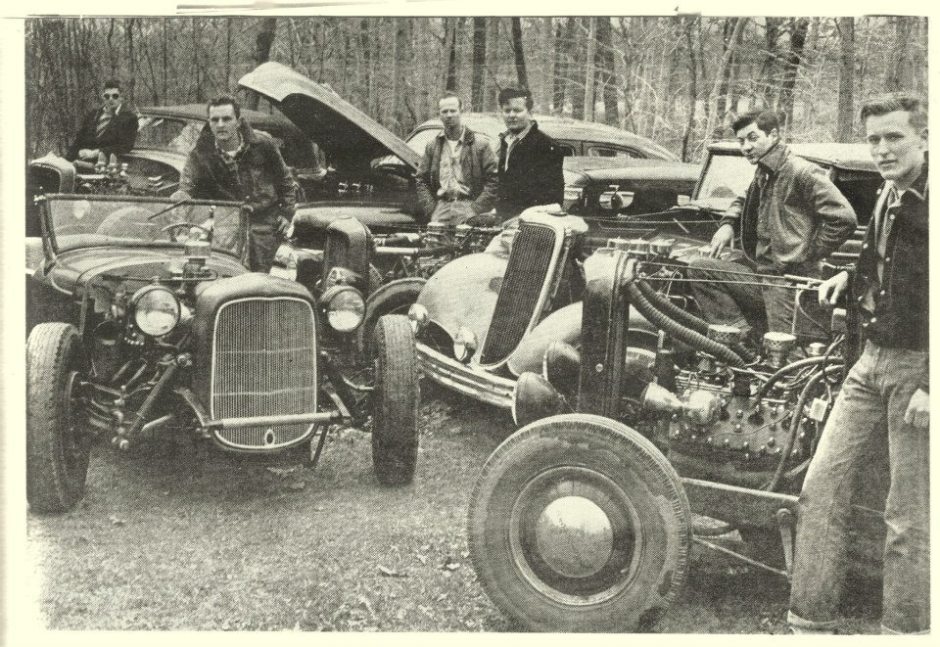 With the introduction of these new engines, it became a simple matter to buy an off-the-shelf engine which, with very minor alterations, would produce more power than the old guys used to get from a flathead V8 or a four-banger after weeks, months or maybe years of experimentation. By the end of the 50ies, one could buy a new car from a dealer that was faster than most of the Hot Rods that were made a decade earlier.

Today, flatheads are making a return as traditional period correct hot rodding is kind of en vogue now again. Especially here in Switzerland where laws are tough you can’t really put a blown Hemi in your Model A and drive it on the streets so a lot of guys choose to run Flatheads and build their car as traditionally as possible.

Read more stories about the history of hot rodding here.