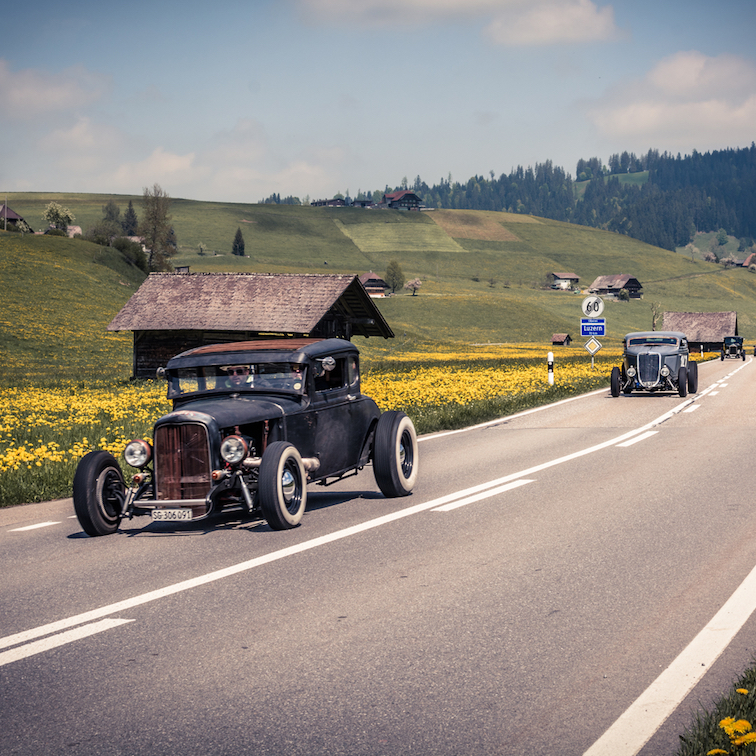 What happens when you mix about 80 Hot Rods and some of the most spectacular mountain scenery? Join us along the ride on the ACES POKER RUN and find out.

Quite early for a Saturday morning – especially when Friday night was a bit too long – we arrived at Restaurant zur Schlacht in Sempach but we were awakened right on spot: If this was just a car show, it would already have been one of the coolest shows we’ve ever been to: Nothing but traditional Hot Rods and Kustoms, all pre 1950, and all eager to go out on a big ride.

After getting briefed by Aces Car Club about how the Poker Run would work everybody jumped in their cars and groups of about five cars started leaving in little convoys towards the first stop. You’ve ever heard the rumbling of about 80 Flathead powered Hot Rods starting their engines and waiting to get the go? I promise you, you’re gonna get goosebumps, something I’ve had pretty much all damn day long. 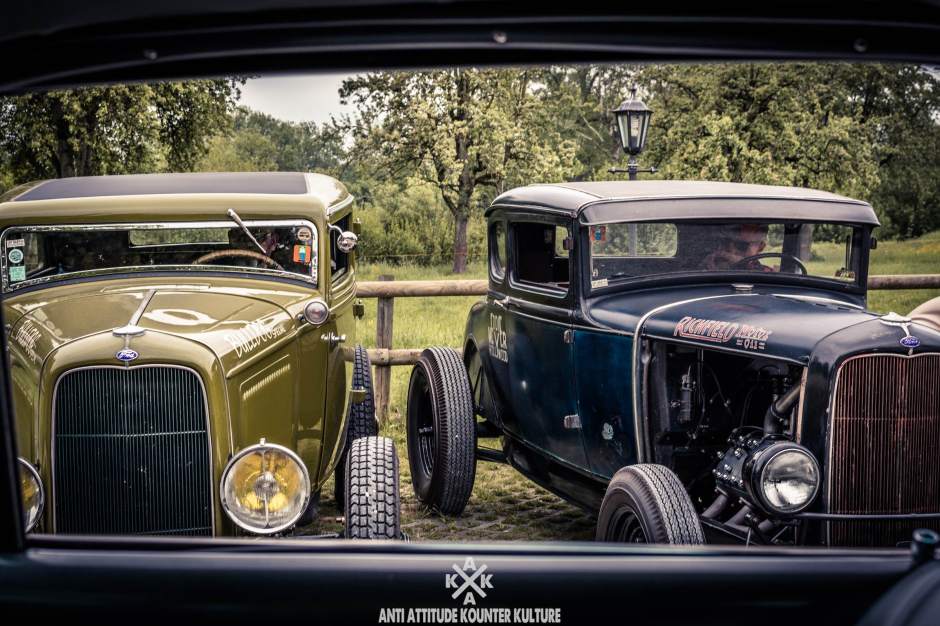 Leaving the restaurant surrounded by Hot Rods front and back got me thinking: “Is this really happening?” I mean, it’s absolutely great riding your old car at all, wherever whenever. But riding in a pack of nothing but traditional Hot Rods is just one big step above. But then it got even better: We left the busy towns behind and made our way over a hill on one of those one-car-only roads. Nothing more but the roaring of the engines, some cows and farms left and right and some absolutely perfect scenery all around us.

We slowly made our way into the Entlebuch and after some cruising arrived at the factory outlet shop of Kambly, one of the biggest manufacturers of sweets in Switzerland. Time to take a deep breath, relax some and realizing that this is actually not just a dream. After having some cookies and coffee everybody got their second poker card of the day and it was back on the road.

We were now riding through the Emmental, if you’ve ever seen postcards of Switzerland, this is probably where they were shot at: More picturesque farms and houses and even more winding roads. Crossing the Schallenbergpass – which goes up to about 3’000 feet of altitude – we arrived in the canton of Bern to have lunch at a local burger and BBQ joint. Once again time to go check out all the cars that were part of the run and get your third poker card. With now three cards in your pocket, you could already kind of guess if you would get a good hand or not.

After lunch we headed down to the city of Thun only to find out that a big construction site blocked the way we were actually supposed to ride along. We had to take a detour and drive right through the city center. Being Saturday afternoon the town was packed with tourists and locals alike and a lot of people looked quite confused seeing all those “weird” cars drive by. The amount of noise all those cars made must have had its own impact on everybody as well. There might have even been some police officers looking at the convoy from far away but then gently turning away to look into a shop window when we rolled by. 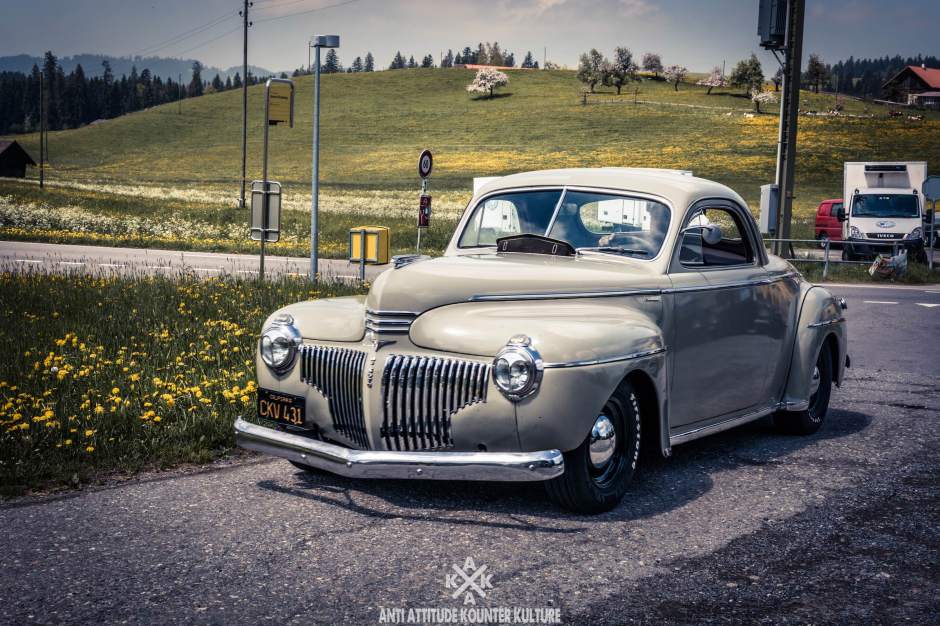 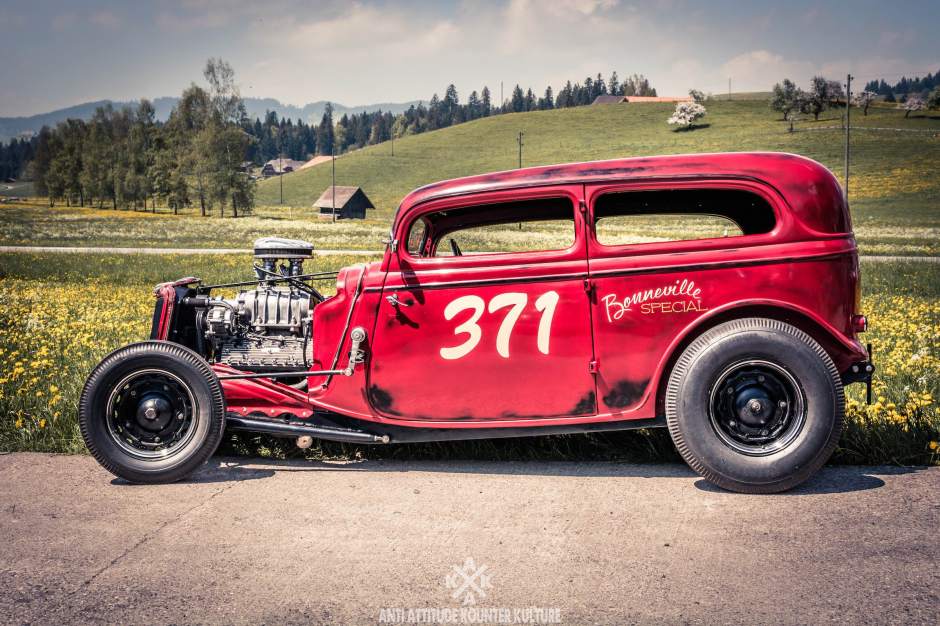 Finally leaving Thun behind, our engines got some well deserved cooling after the traffic jams that were all over town. Riding along the Northern side of LakeThun with the Alps in plain sight on the other side of the lake our little convoy was on its way to approach Interlaken. After riding the Autobahn for just a few kilometers – by the way the only time we rode on the Autobahn on the whole run – we arrived at the Seehotel in Interlaken where the second last stop took place. Right by the lake it was once more time for some coffee and sweets and someone might have even taken a little swim in the lake. Rumor has it that this person also got into kind of an argument with a swan but that’s a whole different story. 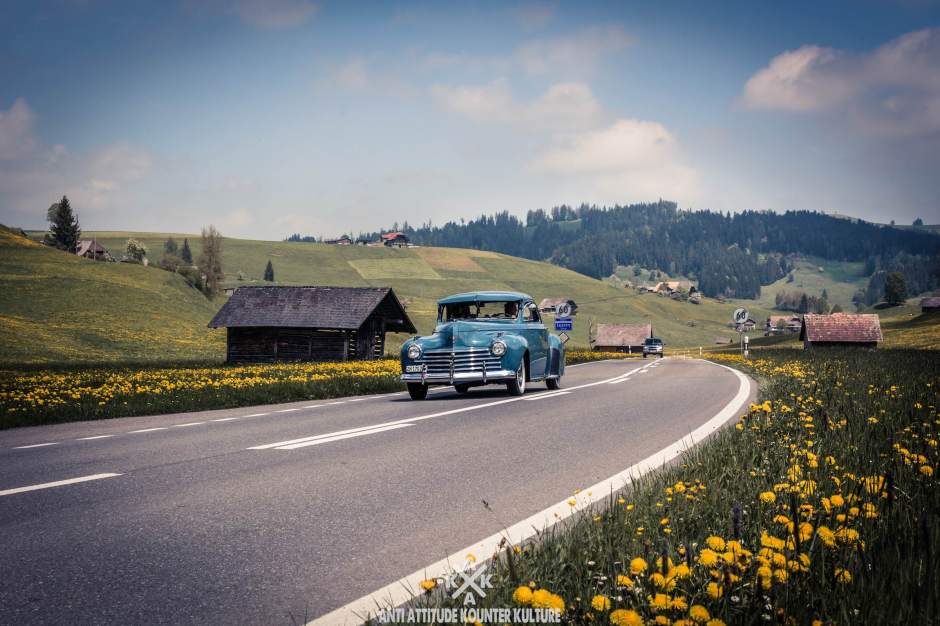 The great thing about Interlaken is, that it’s in between two lakes – hence the name – so we continued our journey along another lake, this time Lake Brienz. This one being even more scenic with some beautiful sights of the Alps in the back I got to the biggest goosebumps-moment of the whole ride: Pretty much out of nowhere, coming out of the forest, we approached a 180° left turn with only the snow covered Alps as a visible background. I was the last car riding in our little convoy and I could fully enjoy the three or four Roadsters making the left turn with this mindblowing scenery behind them.

Sure enough I didn’t take a photo of this epic moment because I had to drive my car. Actually a “problem” I faced multiple times during the run: The most scenic parts of the run were kind of a challenge to be driven in a 70+ year old car so it was pretty much impossible to brake, clutch, steer, shift, accelerate later and also take a photo at the same time.

Arriving in Brienz it was now time for the last big elevation of the run: The BrünigPass, which is also about 3’000 feet high. The cars got a little temperature going up the steep road but we all made it up safe and secure and even more important, back down again as well. We then arrived at ACP Garage in Giswil where the Poker Run (sadly) ended. Everyone was handed their last card and after finding out who had the best hand, some unique and handsome trophies were handed out to the winners.

So what is there left to say about the Aces Poker Run?

First of all, the Aces Poker Run is hands down the most epic hot rod & kustom car event that I’ve ever been too. A big big thank you goes out to the Aces Car Club for hosting this event and organizing it so smoothly. I guess everybody was more than happy with the event. Except maybe the few guys that had broken down, but even for that the Aces had taken care of: A tow truck was driving along and was readily available to help those in need.

Speaking of break-downs: From what I’ve heard about three cars actually broke down, which in fact is not even that much. Let’s do a little maths: Say there were about 80 cars riding along, the run itself was about 200 kilometers plus the ride to Sempach and back home again. So let’s assume each and every of those cars did about 350 kilometers (which is rather conservative I would say), that’s then a total of almost 30’000 kilometers driven in those old jalopies, pretty impressive figure right?

By the happy (and also tired) faces at the finish of the Poker Run you could tell that everybody has absolutely enjoyed the day. It was kind of a tough ride considering the fact that 70+ years old vehicles were used but that’s part of the fun and why we did this whole thing. Personally I’m more than just happy that I was able to be a part of it, it was an honor to be riding along all those other great cars all day long and enjoying the time spent with the people I’ve met along the way.

Only sad thing is, that the Poker Run ist only every two years so that means we all have to wait a little longer until we can go tearing up central Switzerland again for Aces Poker Run – Alpine Edition PART 3.

Thanks again to everyone in the Aces CC for hosting this absolutely fantastic event! We’re already looking forward to returning and being a part of it again. 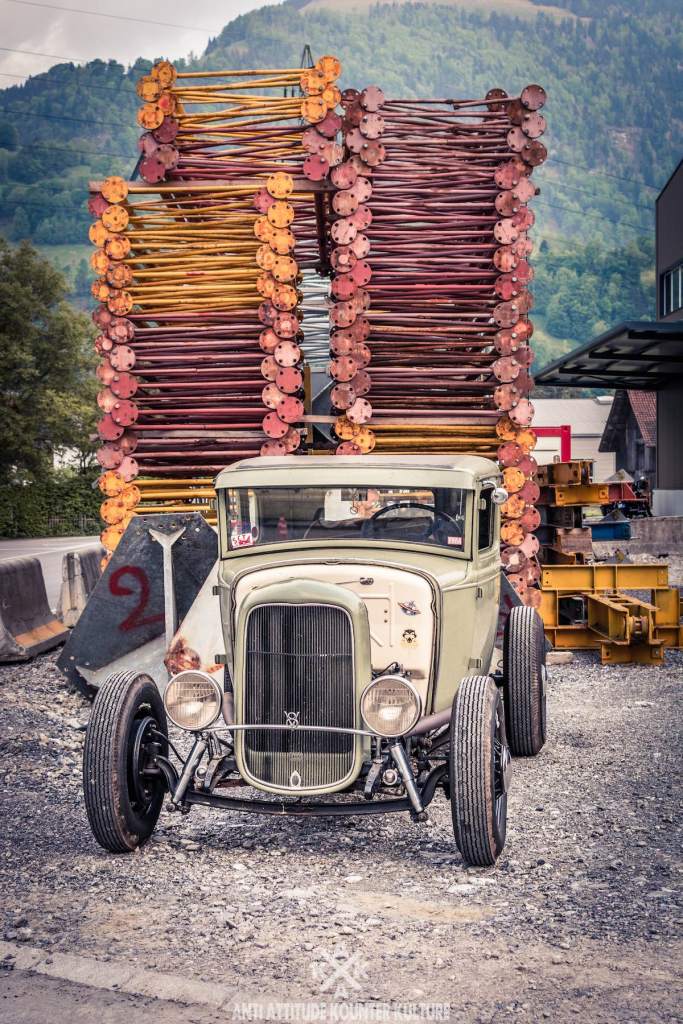