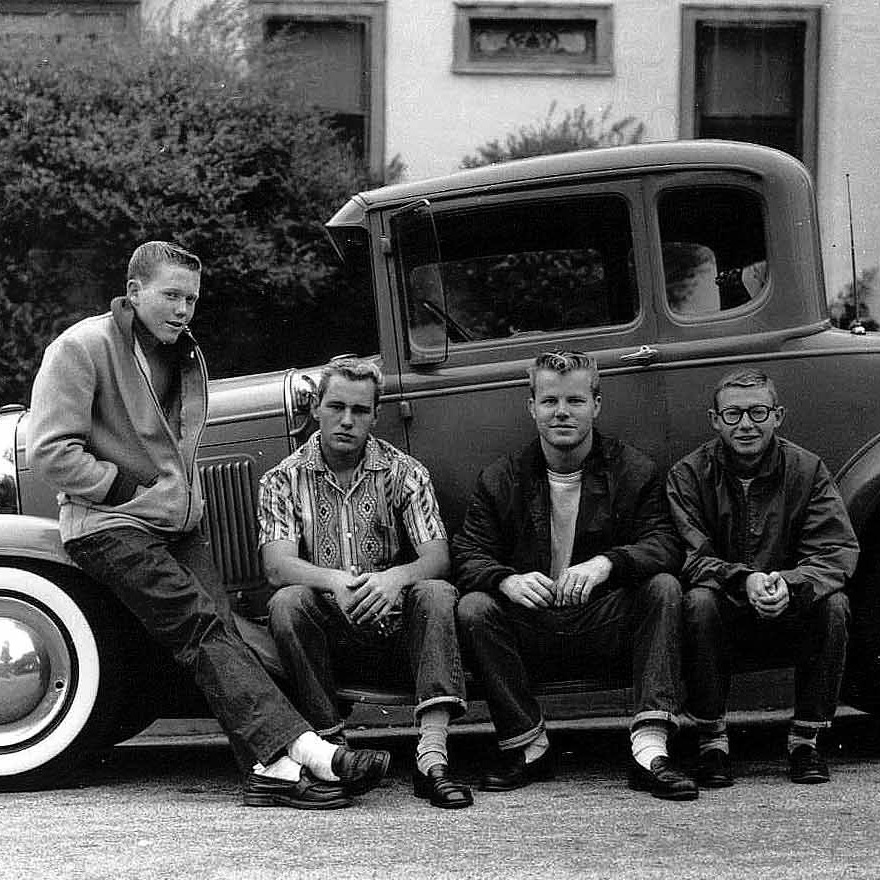 The 60ies brought us a lot of groovy things: Some fine rock’n’roll music, the sexual revolution, youth rebellion, some colorful new drugs, mighty fine space-age-designed cars and the emergence of a total new phenomenon called youth culture. But was it really the swinging sixties that brought us this – by then – absolutely new thing?

Imagine living in a time with no such thing as the internet, no mobile phones, no giant consumer market with fancy products tailored especially for the young generation. The hair was accurately slicked back, boys were boys and girls were girls. Everything was as “normal” as could be, the world was dominated by elder people pursueing the ideal of a single-family home, a nice American V8 car, two children (preferably a boy and a girl), a well trimmed lawn and the general feeling that everything in this world will work out and nothing is threatening this lifestyle. And of course, the United States of America still are the best country out there.

Then came the war in Vietnam, young people started growing their hair, disagreed with their parents (as if this has happened for the first time in history), found out about this new loud music coming from the underground and probably also tried smoking some dope (weed with its roots deep in hell) and might have even expanded the doors of perception with this magical substance that was accidentally discovered in Basel in 1943. All of a sudden, America wasn’t the greatest country of them all anymore, cracks in the surface started showing and were shamelessly exposed by a new generation. Along with the protest came the violence and the establishment definitely realized that there was something going on.

Out of nowhere, environmental protection started to become something people were talking about. Together with this, young people questioned the status quo that’s been around way too long. Bob Dylan was right when he sang that the times they are a-changing and everything seemed new and threatening to what most people were used to. America’s dominant position in the world began to dwindle and people where asking why.

As we look back on this today, TV documentaries try attesting the fact that the 60ies brought us something we call youth culture today. Never before has there really been a market for the demands of the young generation since they were now supposedly for the first time able to buy whatever they wanted themselves. Rebellion fell victim to consume and the revolution was commercialized once and for all. The rest is pretty much history.

So were the 60ies really the first time this has happened? Or have all those TV documentaries overlooked something that has its origins way before the 60ies?

I think there’s some good reasons that actually HOT RODDING could actually be called the origin of what we know today as youth culture. Maybe not so much in the political or generally liberating sense, but if we look at economics this is defnitely true: The 50ies in general and hot rodding in particular have formed something we today would call a market for teenagers.

Before hot rodding became kind of a professional sport with big sponsorship deals and the average Joe not being able anymore to be competing with the top names in the industry, it really was kind of a grass roots thing: Starting in the 40ies with teenagers just making their cars wanting to go faster using whatever they had laying around and found around junkyards it emerged into the formation of the professional speed industry in the 50ies with some of the big brands that are still around today. And the early 60ies that brought all those “look good”- and not necessarily “go fast”-parts definitely helped forming an industry.

All those industries had teenagers or young adults as their target audience, so one could really speak of the formation of an economic market especially targeted to this kind of audience. Not only speed shops were catering to the needs of the young generation, also drive-ins played an important role having a rather young target audience in focus.

For the first time ever in history teenagers after World War 2 were able to really become a powerful group in the economy. They had money, they were independent – thanks to the mass production and affordability of American cars – and they wanted to do something on their own.

They were also living in a rare and happy age, where fear was not that much of  an impact on daily life: Democracy would rather not be overthrown by monarchy soon again, pollution and problems of the environment weren’t yet a problem people had to face, atomic war was kind of a deal but became more of a threat in the 60ies, the economy was going strong and everybody had jobs and some bucks they could spare to go out and have some fun.

So is hot rodding the origin of what we call today “youth culture”? Not entirely, because if it would be, more people would recognize it. Hot rodding definitely has some aspects that make it a seed for modern youth culture: With the economic rise in the 50ies teenagers were liberated and had money to spare, so they helped generating a new market. And they wanted to be different from their parents – not as radically as the young generation of the 60ies but still – and used the accessibility to cars as their no. 1 means of transportation. The roots of the revolution that the following generation would have, were planted somewhere – likely in Southern California – straight after the war and blossomed during the 1950ies and into the 1960ies where they eventually would become the seeds of utopia.

Read more stories about the history of hot rodding.